TTIP under pressure: what are the forecasts?
Admin
Main
0 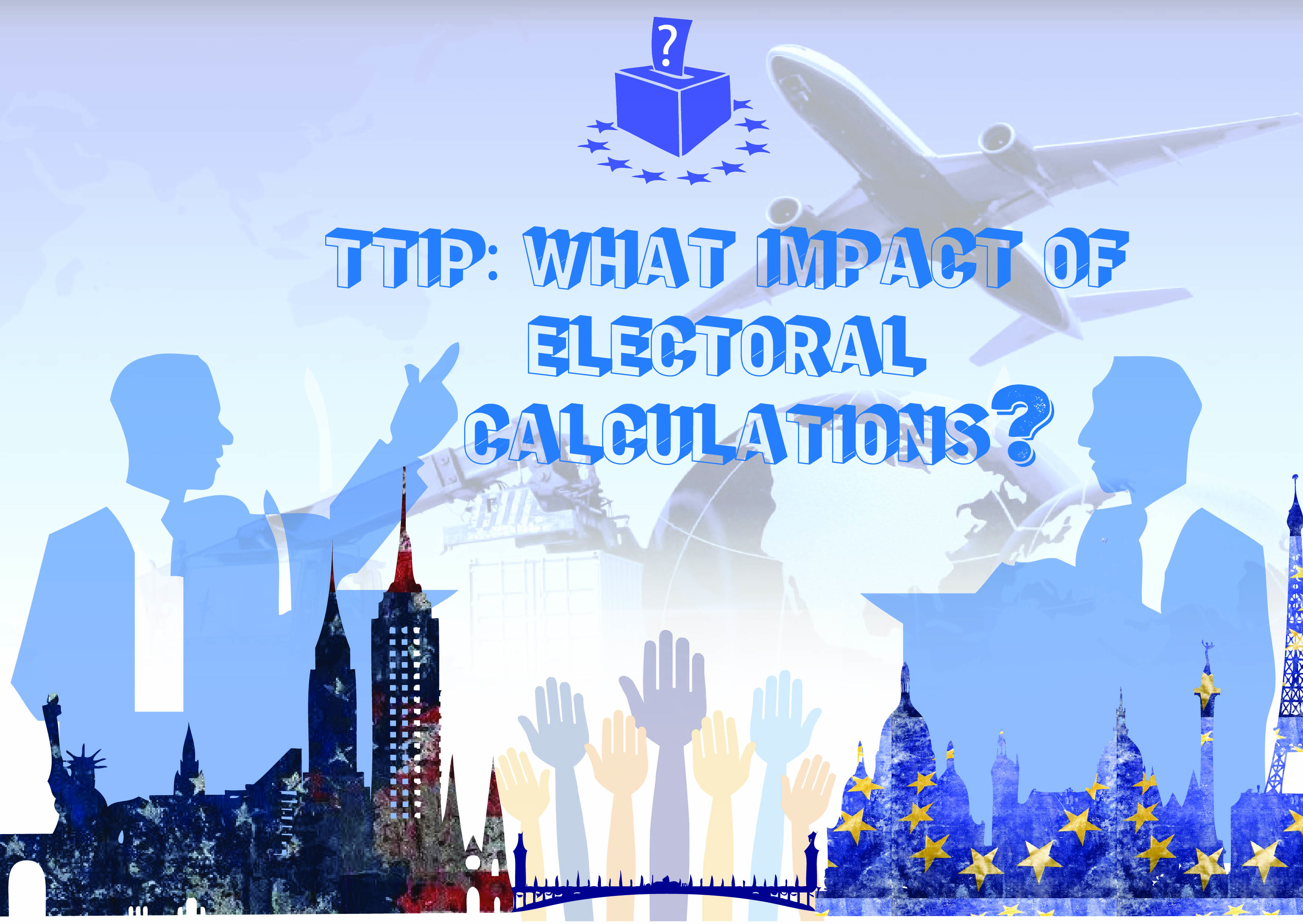 Despite lengthy negotiations and the optimism of the top-level political elites in Hannover, the fate of TTIP is far from certain. The on-going revelations based on leaked documents are meant to give an important blow to the negotiations. Their real impact on the public opinion will be measurable in the coming weeks, while on the medium-term crucial electoral contests are looming ahead.

Most of the commentaries that analyse TTIP look at the technical challenges, ie. disagreements between the two sides in various chapters, whereas the political / civic challenges seem to be highly underestimated. This analysis takes a birds-eye view of the EU-wide political landscape in the coming period, the likely developments in the European public opinion and their impact on the outcome of this game-changing trade deal.

1. The approval of TTIP is a complex political exercise

Fundamentally, once the technical agreement is ready, TTIP will have to be approved by both the European Parliament and the EU’s Member States. The challenges of this process seem to be largely disregarded at the moment. The current lack of factual and non-ideological analyses of its dynamics can create a false impression of “security” to the supporting political elites and stakeholders and then a “surprising” outcome pops up out of the blue, as it happened in the case of the rejection of ACTA in 2012.

Just as in the case of the anti-ACTA campaign, the anti-TTIP campaigners are building up support among the citizens using two separate key arguments that target different publics: 1) the content of the deal as such and 2) the lack of transparency of the negotiations. This way, the campaign aims to convince the more moderate segments of the public using economic, social or environmental arguments, while other segments by using the anti-establishment rhetoric.

The approval of TTIP cannot be taken for granted by those who promote it, especially after the latest developments in two Member States: the rejection by the Dutch of the EU-Ukraine agreement and the victory of the anti-EU far right candidate in the 1st round of the Austrian presidential elections. These two outcomes have come as a surprise to some, although all the sociological indications were there to predict it.

Our data analysis shows that unless efforts to address the concerns with regard to TTIP are undertaken in key countries, a “surprising” failure of huge proportions can surface, with cataclysmic consequences for the EU institutional system as a whole. Here is why.

2. The contagion effect of referenda

Embolden by the outcome of the EU-Ukraine referendum in the Netherlands, the anti-TTIP camp is already collecting signatures to hold a similar referendum against TTIP (while other trade agreements, such as CETA, are not out of the radar either). Moreover, this development in the Netherlands is far from being singular. The situation in other countries such as Germany and Austria, where a majority of the population is currently opposing TTIP, can evolve in a similar direction. Notably, in Austria, both candidates who have qualified for the ‘final’ of the national presidential elections are opposed to TTIP (although in different degrees).

In order to assess what chances there are for TTIP to make it through the complex EU’s approval process, we undertook a combined analysis of the current positions of the citizens (based on latest Eurobarometer data) and their representatives in the EU Parliament (based on our own VoteWatch data) across the 28 Member States.

A clear majority of EU Parliamentarians is backing the deal, but in some member states the opinion of the majority of the public is different than their MEPs’ one. This observation is critical as the public opinion can reshape the positions of the MEPs, as well as those of their own national governments, especially if strong pressure is applied by the civic forces that oppose the agreement and/or by political forces that are eager to capitalise on this (apparent) lack of representativeness.

Our figures show these mismatches. In some Member States, such as the UK, France and Greece, the public is more favourable to TTIP than their own MEPs. This mismatch stems from the relatively high amount of MEPs from these countries that sit in the ranks of fringe anti-EU political groupings (GUE-NGL, EFDD and ENF). However, in other countries, the situation is the other way around – and those can become “the swing states”.

3. French elections are to be watched

Notably, the opposition to TTIP comes also from among the British and French delegations in the Socialist and Democrats (S&D) political group in the European Parliament (see breakdown of MEPs’ voting on TTIP). While the British have less leverage as they have lost general elections at home recently, the data indicates that one should follow closely the developments in France, which will face turbulent presidential elections in spring 2017. Even though President Hollande has initially spoken in favour of TTIP, his stance seems to be gradually changing under pressure from a combination of domestic developments: 1) key Members of his own party are opposed to TTIP, as shown by the opposition of the French Socialist MEPs and 2) the basis of support in general for President Hollande is extremely low (15% in the polls) and eroding further (including within his own government) at a critical time, ie. ahead of the French Presidential elections of spring 2017.

Intuitively, the growing far-right Front National is opposed to TTIP and may find it handy to make this a subject of its electoral campaign.

4. German and Austrian centrist pro-TTIP parties are under huge pressure

At the same time, the countries wherein the public is generally opposed to TTIP might turn out to be decisive for the final fate of the proposed trade agreement. The mismatch between the current perception of TTIP by German citizens and German MEPs is impressive: German MEPs are highly supportive of TTIP (70% of them voted in favour), whereas the German public opinion is the second least favourable to TTIP (27%), after the Austrian one (22%). Indeed, opposition to TTIP is particularly strong across the Germanosphere. Additionally, the recent gains made by the far-right wing and Eurosceptic parties in Germany and Austria (respectively in local and presidential elections) are likely to make things even more difficult to manage by the current (grand-coalition) governments in Berlin and Vienna. Importantly, Germany will hold general elections in 2017 and Merkel’s CDU and Gabriel’s SPD are struggling to contain the rising of both AfD and the Greens (both reserved about TTIP). Austrians are expected to vote and form a new government in 2018 at the latest (the far-right anti-TTIP FPO won the 1st round of the presidential elections and push hard to be part of the next Austrian government).

We did an in-depth comparative analysis that looks at the behaviour of parties versus their core electorates across the 28 EU Member States (based on self-positioning of the respondents on the left-right axis). The results are striking: the biggest political risks across the EU for supporting TTIP are incurred by the two coalition partners in Berlin. Only 1 out of 3 voters of Merkel’s CDU/CSU have a positive opinion about TTIP, while 100% of the CDU/CSU representatives in the European Parliament have voted in favour of this trade agreement. Its “grand coalition” partner, the SPD, is in a similar position: only 24% of SPD’s electorate backs TTIP, compared to 88% of its EU Parliamentarians. Of course, TTIP is not the only (or the biggest) issue in the political debates at national level, but its role and electoral impact cannot be ignored either.

5. Mind the gap: elections are coming

With the German general elections looming ahead (September 2017, possibly right in the middle of the TTIP’s ratification process) and the anti-TTIP campaigners making their voice heard ever louder, the pro-TTIP camp will try to have this huge rift diminished somehow. The two big options that it will have on the table are: a) upgrading the “selling” strategy and/or b) shrinking the scope of TTIP as such. If the “pro-TTIPers” will be unsuccessful in bridging this gap, we will witness one of the two “surprising” outcomes: 1) the grand CDU/CSU-SPD coalition (or part of it) will take distance from TTIP to save its skin (read “save its votes”) or 2) they will back TTIP and lose even more electorate to the AfD, the Greens, die Linke and others, fragmenting further the German political landscape, as it has happened in Spain and it is happening in neighbouring Austria.

For their part, the Austrians are in a similar position. Austrians have had historical reservations towards strengthening relations with the United States, as they have not joined NATO and do not shy away from having a closer relation with the Kremlin than their EU partners might like.  The centre-right OVP (member of EPP) is the only one among the Austrian parties that clearly backs TTIP. Unluckily for OVP, its electorate does not seem to be of the same opinion (only 21% of self-defined centre-right Austrian citizens back TTIP). OVP is currently junior coalition partner in Vienna, but it is performing very poorly in the polls and its candidate did not even make it into the second round of the presidential elections. Hence, it is not clear how much incentive it has to push for the approval of TTIP.

Their senior coalition partners, the SPO (member of the European Socialists), have voted against TTIP in the European Parliament and will have to be very careful at home not to become a small party: they too are scoring badly in the polls and their candidate exited the presidential race after the first round of presidential elections.

6. There are systemic risks for the EU construction in play

The scenario that poses the greatest risk for the EU construction is that the governing elites in countries like Germany, Austria, France or others back TTIP “privately” in Brussels (to get the job done), but then publicly blame the EU for it (for electoral purposes), as it frequently happens. This would give one more blow to the Union.

In the light of the outcome of the Dutch referendum on the EU-Ukraine association agreement, the scenario of a Member State holding a referendum on TTIP is not so far-fetched. The possibility is strengthened by the fact that the Austrian Prime Minister Werner Faymann has already promised a referendum on another EU-related issue, namely the potential accession of Turkey to the European Union.

All in all, a majority of policymakers across European institutions and political elites in the EU have been supportive of TTIP so far, but political support for the agreement in “swing” Member States can erode and reverse this trend. The pressure of active segments of the public on king-maker political players in key moments can be decisive and turn around the agreement negotiated at length by the technocrats, as it happened in the case of ACTA in 2012. This is how European democracy functions and this is why these processes cannot be ignored by stakeholders advocating on either side or the decision-makers.
Source: Votewatch Blog – Doru Frantescu’s Posts